View cart “Discussing Tactics” has been added to your cart.

Comes with numbered certificate signed by Anthony Sawrey as representative of the Hugh Sawrey estate. All prices include postage and packaging

A night scene showing one of the least popular jobs of a stockman but one one of the most romantic and challenging scenes for a painter: The night scene.

The dogwatch was a job that ringers took turns doing. While the other slept, one would stay awake to watch over the mob for any wild dogs in the vicinity. They would make short work of the animals if they had the chance and so the dogwatch rider’s job was a very critical one. Hugh Sawrey did numerous night scenes like this one during his career and shows his mastery of paint representing the shadows and stars of a typical night on the freezing plains.

Be the first to review “The Dogwatch” Cancel reply 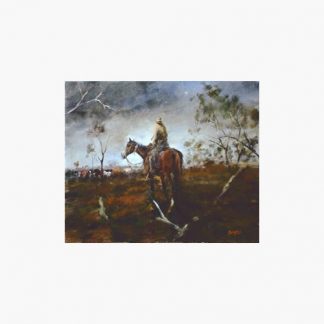