Hugh Sawrey CBE (born in Forest Glen, Queensland, 1919, died Benalla, Victoria, 1999) was an Australian artist and founder of the Australian Stockman’s Hall of Fame, Longreach, Queensland. Sawrey was an artist whose prolific output of paintings and drawings of the Australian landscape and its people contributed in a profound way to the preserving of the memory of times and places in Australian history that were in danger of being overlooked and lost to posterity. Throughout his long career, he experienced firsthand events that shaped Australian identity in the 20th century and documented through his work many of the characters that lived in this period. 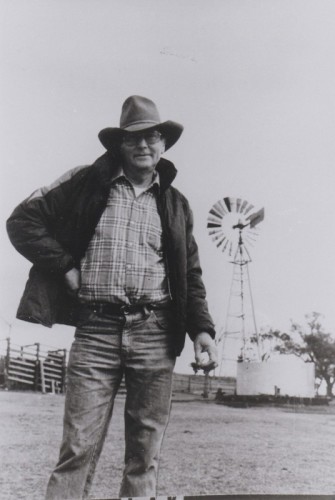 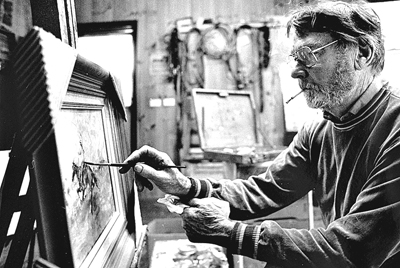 Early Life
His father, a teamster died when Hugh was only three years old. Together with his mother and older brother Alan, Hugh moved to Brisbane in the early 30’s. However he left school when he was 15 and began working in outback QLD to assist his family during the Great Depression. He worked a multitude of jobs from droving to shearing, traveling extensively throughout the interior of Queensland, the Northern Territory, and Western Australia. During this time he taught himself to paint and draw, practicing by the light of campfires and documenting the places he saw and the people he met. From the drovers and stockmen of the great stations to the indigenous people that lived in regions where he travelled. He also left a vast range of murals painted on the walls of homesteads and pubs all over the country he know so well.
In 1964 Sawrey moved to Brisbane to become an artist full-time and he set up his first studio in the Royal Hotel in Queen Street, Brisbane. His first Dealers were Keith Moore of the The Grand Central Gallery, Julian Stirling, Southern Cross Gallery Melbourne & John Cooper, Eight Bells Gallery, Surfers Paradise. Later he was represented by Wynn Schubert Galleries and Jim Elder Fine Art in Adelaide.Sawrey exhibited widely throughout Australia and in 1979 was selected as one of two Australian artists to represent Australia in “The Horses of the World” exhibition in London. Sawrey was also the founder and a former chairman of the Australian Stockman’s Hall of Fame at Longreach.<[2]<[3]

Exhibitions and Collections
In his long career Sawrey was awarded several art prizes including the Queensland Industries Fair Gold Medal and in 1989 he was awarded a CBE for services to the arts.